It’s almost the end of Hanukkah (also known as the Festival of Lights because of the miracle of a small amount of oil that lasted eight days and lit the menorah of the Maccabees) and I’ve just experienced a miracle. Seriously. And not only that, it was a miracle of light!

Dealing with living alone after divorce is tough. If you’ve been there I don’t have to tell you. There’s loneliness and sadness, maybe regret, loss of family, even loss of friends (those that you thought were but actually weren’t). On top of that, in my case, I had to learn to deal with a house and all the problems that come with it. I no longer had a husband I could call on to solve technical, plumbing, electrical or handyman problems. I was totally on my own. Of course, living in a country I wasn’t born in and not speaking the language perfectly doesn’t help the situation – it can add to the frustration and despair.

In truth, I’ve been coping rather well. Not that I’ve learned to use a drill or fix a leak, but I now know, more or less, who to call. And when in distress, people here are generally helpful. As one very astute furniture dealer told me years ago when I was in the interior design business and expressing my fears about something going wrong with a client’s delivery “Don’t worry honey. Everything can be solved with either time or money.” 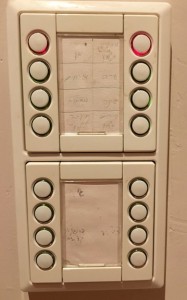 My latest problem might very well have been solved with money – but at a cost so high that I decided not to deal with it and just live with the consequences. My house is designed as a smart house – meaning that the light system is connected to computers somewhere in the universe – and when something goes wrong you’ve got to call in the experts. And those experts are expensive! At over 400 shekels per hour I knew that fixing all the lights in the house that were flickering, misfiring, acting weird, etc. would cost a fortune.

When I was really desperate, I went to the garage, flipped up the switch in the main electrical cabinet (an electrical city) went back to the bedroom and turned on all the switches I needed and at nighttime, back to the garage to flip everything off again. Eventually I got tired of the trips back and forth so I just stuck with not having enough light or air in the room.

Basically I was left with two options, pay a fortune for someone to come over and deal with the problem or live with no lights, A/C and ceiling fan in my bedroom. I went with the latter. 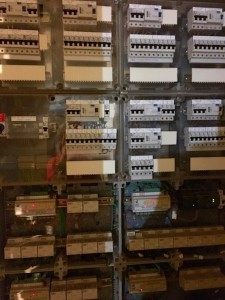 It’s been several months and although frustrating, the situation was bearable. Yes, it’s true I couldn’t see the clothes in my closet in the evening (closet being in the corridor) and yes the functioning light in my bedroom ceiling was not bright enough to brighten the room but, you know… there are worse things in life.

Last night I was dressing, getting ready to go out to a Hanukkah get together and was annoyed that I couldn‘t see myself in the mirror. Stop being lazy, I said to myself, just go to the garage, flip up the switch and get yourself some light. So what if you have to clear the electrical cabinet door of dangling vacuum accessories, a broom blocking it and cans of paint spread across the floor. I foraged around the area, cleared it of all obstructing objects and flipped up the switch. Back to the bedroom and the malfunctioning electric panel. On went the lights. I could see again! And then, when I was done and ready to leave, that’s when the miracle happened.

This may seem like something insignificant, but in my current world it’s huge. A necessity I had so long lived without came back into my life. I had forgotten how nice it was to see myself in the mirror (I take that back, it wasn’t so nice to see my fat ass).

I’m not very spiritual, and generally pooh-pooh the idea of the universe coming to one’s rescue. But there has to be something here, don’t you think? My lights coming back on as a symbol of the Holiday of Lights? Yup, I’m sticking with that theory – that someone up there or out there was watching out for me and gave me this lovely Hanukkah present.