Let’s bitch about the bitches!

Be warned, I’m writing this under the influence. I’ve had Chardonnay with my dinner – two glasses, maybe more. So if I get a bit loony, forgive me.

I want to write about missed opportunities – specifically when someone says something nasty to you and you don’t have the presence of mind to answer in kind. You’re shocked, you’re insulted, you’re too polite or you’re in total denial that the bitch (it’s usually a woman, isn’t it?) meant what she said.

I should however, add a disclaimer. I’m probably guilty of being a bit of a big mouth and sticking my foot in it more than once in a while. I have been told on occasion that my opinion was not required. Once it nearly ended a treasured friendship, another time I was blamed for my friend’s decision to leave Israel and return to the US. I realized, that even when asked for, its often better to keep one’s mouth shut. I’m still trying to learn that lesson and will lapse. Mea Culpa. But that’s not what I’m talking about. I’m referring to nasty, insidious, cruel comments that may or may not be hidden behind pleasantries.

Recently, I heard a perfect example of what I’m talking about in a movie, expressed by Michelle Pfeiffer. “Oh darling, only you could pull off that color.” Then, as the woman walked away, Michelle turned to her friend, “Doesn’t she look awful, who would think of wearing puce?”

A particularly painful recollection of being slapped in the face by a comment had to do with body image. It occurred at a Halloween party at my friend Tom’s loft in Manhattan. Those were the days when I was thin and cute and living an exciting New York life. Tom and I were known as the Will & Grace of the day (he was the gay one). When he threw a party, it was always a huge hit – I was very excited.

I struggled with my outfit and finally settled on Cleopatra. I wore a white body suit as the foundation, had gold lamé fabric for my skirt, fashioned gauzy white curtain fabric as a shawl and added lots of jewelry, a black Cleo wig and tons of makeup. I was feeling quite satisfied with myself. Freud showed up, as did Madame X (exactly as in John Singer Sargent’s painting), King Louis (not sure which number king) some pirates, drag queens, and the usual assortment of characters. 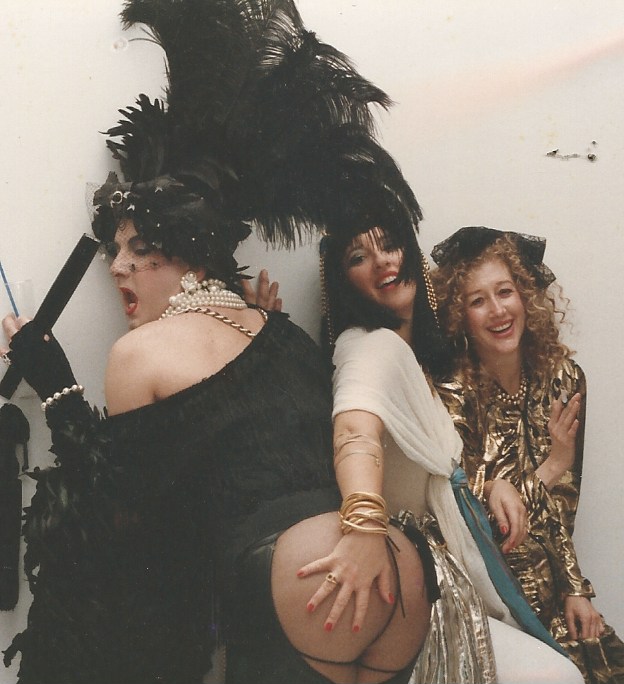 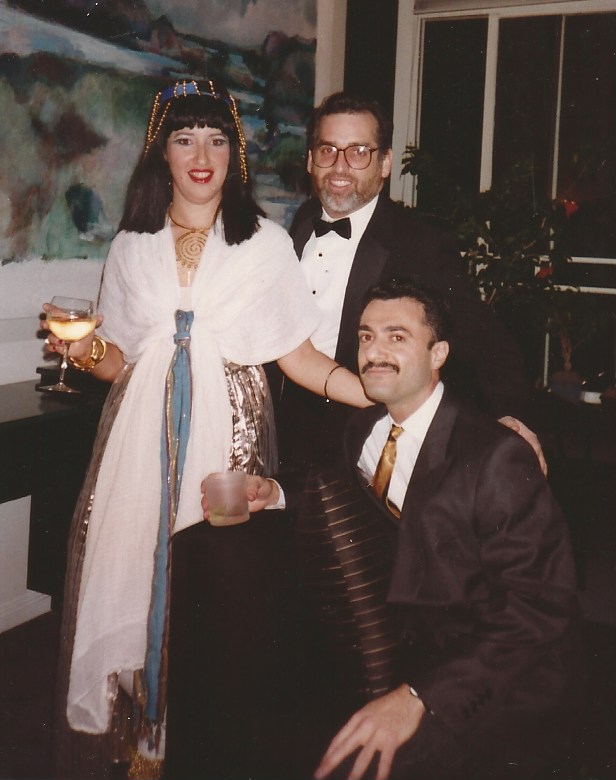 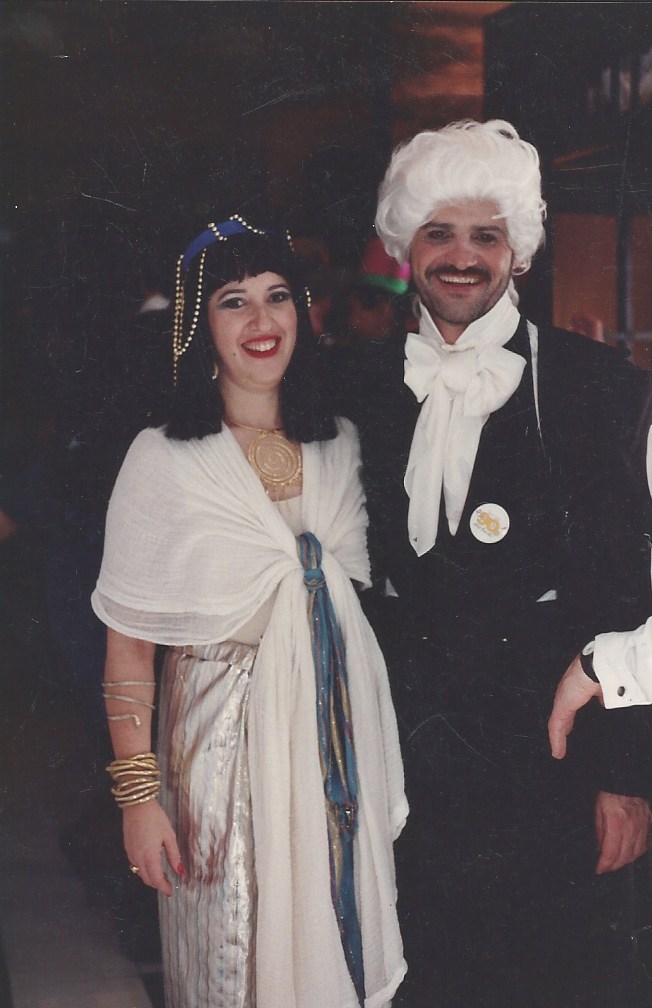 Being the best friend of the host, I assumed the responsibility of helping, so off I went with a tray of drinks. As I approached a group sitting on the sofa, some people I knew, some I didn’t, a very pretty woman took the cocktail I offered and blurted out “Are you pregnant?”

I was shocked and didn’t know what to say. I just answered “No, why? Do I look it?”

That was it. She turned to the person next to her and continued her conversation. I was devastated.

Its been twenty-five years and I still remember the sting of her comment. She ruined the evening for me, and her remark has stayed with me all this time. I didn’t know her, had no idea why she would say such a thing to a complete stranger and ever since then I’ve wondered what I could have said to combat her evilness. I had considered “accidentally” spilling the drinks on her and was rather sorry I hadn’t. I suppose it is possible that I looked bloated in the outfit and she honestly thought I was pregnant. But any normal person, especially a woman, would know how dangerous that sort of comment can be. If the woman is indeed pregnant, then she might not mind (and then again, she might). But if the victim is not pregnant – then there’s no excuse for such blatant rudeness.

Another more recent incident occurred at a gathering of local and diplomatic women – a lecture and buffet lunch in Herzliya Pituach. I saw an older woman that I knew and commented to her that she looked lovely, and that her new hairstyle was very flattering. I was especially careful not to say it made her look younger, for fear that a comment like that would acknowledge her elderly status. (I also don’t like it when people tell me I look as if I lost weight, as if it’s a compliment. It’s so clear that they’re thinking I should lose weight and assume that I would want to. Can’t you just say I look good?). Anyway, she thanked me and immediately rattled off a story that another woman had come up to her recently and mentioned that she did not like the new shorter hair, that it was not flattering at all. She was hurt and puzzled as to why someone would make such a cruel, unsolicited comment. I acknowledged her feelings, agreed with her assessment and made my way to join others at the buffet.

As I was scanning the table full of delectable goodies a friend pointed to something and told me I must try it. I nodded in agreement, and reached over for a spoonful. As I scooped it onto my plate, the elderly woman with the nice hairstyle immediately butted in. “Oh Anne, you really don’t need that!”

ARE YOU KIDDING ME?

Not only had I just paid her a kind compliment but I had listened to her story about the indignity of unwarranted comments. Had she really just insulted me by implying I was heavy enough and shouldn’t eat whatever that morsel was? Yes, indeed, that’s exactly what she had done.

This time I did come up with answer. And in retrospect, maybe it was a bit harsh or over the top. I was so angry at her, I just lashed out “What are you, my f..king food warden????? Only my comment didn’t have the spaces in the f word. She was aghast and months later her husband cornered me in a cafe and told me I owed his wife an apology for the awful way I had spoken to her. Really? You think so?

I was actually proud of myself for coming up with a response so soon, even though admittedly it was rather strong. But what else could I have said?

Haven’t you had experiences like this? Haven’t there been times when you were taken aback by what someone said to you and only wished later on that you would have had the sense to say something appropriate in response? I do know one great response that can work in some instances – go ahead and try it. When someone says something that insults you, disagrees with you or just plain irritates you, feel free to say: “Excuse me, but you must be mistaking me for someone who gives a damn.”

I want to hear from you! Tell me what some unkind person said to you and what you thought of saying later – when it was too late. Let’s get out all our hostilities. No more nice guy – we’re going to get tough. Women power!

And maybe we’ll even write a book about it – “What I Should Have Said to That Bitch!”

2 comments on “Let’s bitch about the bitches!”