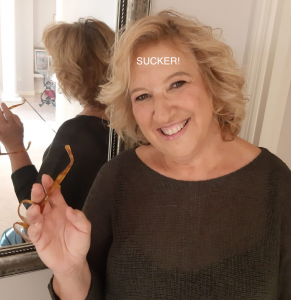 Is it me? Is there something on my face that says ‘Sucker here! Go ahead and take advantage of me.’?

Or is that young (and older) Israelis are just so self-involved that they don’t need to follow the rules of common decency? I am SO over this behavior!

Today was the third time in a week, and second time in two days, that I got dumped on – and the excuses (those that even bothered to come up with one) were so flimsy that it boggles the mind.

I live in Israel, after having grown up and spent a good chunk of my adulthood in New York City. That’s also where I studied and got my university degrees and gained my first experience in the field of employment and employment ethics. I wouldn’t have been so arrogant to say it before, but I will now – that’s where I learned to be professional – whether in my dealings with clients, suppliers or just people in general.

Then I had an epiphany (lobotomy?) and decided to make Aliyah. What was I thinking? It’s been twenty-six years and I’m no closer to understanding the Israeli mentality.

When I arrived in the country and timidly showed my portfolio to potential employers, the response was always the same. “Oh, you studied and worked in interior design in New York, you’re probably really good. Want a job?” It wasn’t like that 100% of the time, but it did happen frequently enough for me to believe that they were really impressed with me. Wrong! They weren’t so impressed with me per se; they were impressed with the fact that I was from New York. They hardly looked at my design work and were ready to hire me? That’s just too weird. It indicated a jealousy or a perception that everyone from New York (maybe from the US in general) is good and qualified and smart and capable. If I wanted, I could have milked it again and again, but I didn’t.

Now, all these years later I come across shmendriks again and again in my line of business and I see that they’re still making assumptions about me. I make my living by renting out my rooms. I have a large house and what started out as a fun idea has grown into a serious business racking up awards from TripAdvisor and Booking.com and features in international lifestyle magazines. Most of my guests are brides getting ready for their weddings. I’m proud of what I’ve built, but painfully aware that it can all disappear in a moment. One lousy review, one disappointed bride and my reputation is ruined. I try to be very careful.

It’s not that I’m careful because I have to be. I want to be. I love hosting people – it suits me. I love their reactions when they arrive and see the pretty rooms waiting for them, I love when they compliment me on the food, or the spectacular views or the very personal service they receive here. I love being an important part of the pre-wedding experience. I believe in being a good person and putting it out there. Not just because its going to come back to me, but because it feels good. (And yes, I kind of do believe that being a mensch brings good stuff back to you). If I can go the extra mile for someone, I usually do. For all the right reasons.

And then something happens to bite me in the ass. And it gets me SO mad. I’m not saying that this stuff only happens here in Israel, of course not. But as this is my home, and most of my contacts here are Israeli, this is where it happens to me. And today was the straw that broke that camel’s back!

A makeup artist left a small plastic palette here that she used for her makeup colors. She called, asked if I found it and asked if she could send someone over to pick it up. I was so pleased that I had found it and promised to put it next to the door and wait for her to show up. That was a year ago. Every few months I hear from her or a friend, asking if they can come by. They never do. Yesterday her friend texted and asked if she pick it up. Although I hadn’t remembered where I put it, I searched and found it and once again put it by the door. We agreed that she would come by around 11 today, and if there were any change as to the time, she’d phone. All documented in a text.

Have you heard from her? Cuz I sure haven’t.

A message to her tonight brought the following answer: ‘Oh, I had car trouble so I couldn’t come, but you can put it outside for me next time if you’re not home.’

Story number two. A hairstylist called earlier in the week and asked if I would consider letting him and a “famous” makeup artist use the house and garden for a few hours to shoot a model. Only the three of them would be here, and he promised huge exposure for Casa Cala – my business. “My friend has over 300,000 followers on Facebook and we’ll do a story about Casa Cala and Instagram the hell out of it and you’ll get tons of exposure.

Normally I charge for photo shoots here. But I knew these guys didn’t have a budget, they were doing this all by themselves and I figured I could be generous. He reminded me how “cultured” (yup, he used that word) they were and of course they’d clean up and leave the place exactly as they found it. I agreed. The date was set for tomorrow morning. My only condition was that they sign a contract with me, guaranteeing exposure on their various social media accounts (lesson I learned from other times when I agreed to offer my house and got nothing in return) and the promise to cover any damages. Done deal.

In preparation for tomorrow’s shoot, I changed a meeting I had for the morning, canceled an exercise class scheduled for the afternoon, cleaned the room, washed the floor, put away the massage table and all the equipment in there, paid to have the contract translated into Hebrew and bought some snacks and drinks. I was all set and looking forward to their arrival. I sent a message to the hairstylist with the contract attached.

His response: “Oh, we’re not doing it. We couldn’t get a model for tomorrow so it’s off. But we’ll be happy to do it another day.”

I wasn’t shy in my response “And you didn’t think you needed to let me know?”

“Sorry, hopefully we’ll get a model for another time and can reschedule with you.”

No buddy, I don’t think so.

Last summer I had a bride who showed up with several more people than I had expected. I explained that the lunch was for eight people, and each additional person would cost extra (which of course is in my contract). Her dad, who was in charge of the whole thing, said “no problem, I’ll settle up with you tomorrow, after the wedding.” Then he told me that there may be extra people sleeping over and asked me to set up three more beds. Couldn’t get housekeeping help at night, so I did it myself. Ok, not the worst thing in the world – I was happy to accommodate. It clearly states in my contract that extras at lunch, or additional people sleeping over requires advance notification and additional cost. I didn’t suspect there’d be a problem. He was extremely friendly and the bride and her team were lovely.

Sure enough, there were four more at lunch which stretched out over three hours (meaning I was standing in the kitchen waiting), and two extra people sleeping over and eating breakfast and not a word from the dad. On the day after the wedding, he ran into the house, as his car was running outside, to give me the key and say thanks. I was shocked and sad, but didn’t have the guts to deal with the financial matter. I decided to handle it through an email. Two days later, before I wrote the email, there was one from him: “Hey, hi there! I think we left a bunch of beer in the fridge up stairs. I’d like to come by and pick it up.” I took the opportunity to remind him of the extra money due me and he bolted. “What? What extra sleeping? We had rented the place from you anyway, what difference does it make if I had extra people? I’ll agree to pay you for two extra for lunch, not four because I don’t think there were four extra, but certainly not for the extra beds. That’s not fair.”

I never heard from him again.

And the piece de resistance? This one is really personal so I’m letting it all out here. Last week I was due to have a date with a guy I met on line. We’ve been texting and phoning for two weeks, but due to a bad cold here, and a bad back there, we delayed it. Friday morning, brunch was all set! I was excited. It’s been quite a few years since my divorce and I haven’t pursued a relationship since. I needed this!

We spoke almost every day. I let him be the initiator as I’ve heard stories about aggressive desperate sounding women. He seemed like a mensch, no games. He was a widow, had a great sexy look about him and I was ready for an adventure.

At seven on Friday morning, there was a text from him.  “Good Morning. I have to cancel. There’s an emergency at work – a broken water pipe and I’ve been here dealing with it since five and have no idea when it will be ok. Sorry.” I said okay and wished him good luck.

So… someone solve this mystery for me please? What is it with people who behave so cavalierly? Are they missing the common courtesy gene? Is it a nationalistic thing? Am I damned to come across these people again and again?

Why do Israelis think its okay to let things slide, to brush off mistakes and rudeness? Do they think a simple “Sorry” makes up for totally inconveniencing someone? Are they so into themselves that they don’t understand the needs of others?

I love this country and I suppose its just part of the landscape that I have to get used to. But truthfully? I hate it. And just, as a last word. I ain’t gonna be a sucker no more!

8 comments on “Is Sucker Written on my Forehead?”