I don’t know how, or from where, but Maxie returned last night. I pulled into the driveway from a grocery expedition and I heard loud meowing. I carefully opened the car door and to my utter surprise and delight – it was my darling Maxie. She was skinny as can be, and seemed nervous, but not injured from what I could see. I’ve been on Maxie watch ever since – trying to fatten her up with cat food and a bit of the liver I stole from her canine brothers.

Tonight I went out to check and not only was Maxie out there, but so were her two friends a new very skittish kitten.

Can somebody please explain this to me?

In full disclosure, I’m not a cat person. Never was, probably never will be. I just don’t get the point of them – as pets. They’re snobby and entitled, they could care less about greeting you when you walk in the door, and they pee and poop in the house. Dogs are more my style (although at the moment I’m not so fond of them either – as I’ve just walked in on my dog perched on a pillow on the sofa chumping away on a chunk of carob). But today I’m mourning a cat.

Maxie was with me for 13 years. She was here when I started building my house, along with her sister Mitzi and her father Morris (don’t ask what’s with the M names – I don’t know why I did that). As I like all animals, it seemed only right to start feeding them.

Maxie, a mere kitten all those years ago, used to follow me to the house we were renting nearby in order to get whatever snack I offered her. Next day I would return to see what progress was being made on the house and there she was. Mitzi was the snob: beautiful, aloof and capricious. She had one major accident where she disappeared for a week and returned with an injured jaw and a smashed tail. One very expensive visit to the vet later, she was back to business, tail-less and happy. Morris was a bit of a zhlub, a nice enough Tom but nothing special. Maxie was friendly, approachable and sweet. In time, I began to see how unique she was.

While I wouldn’t let the cats into my home, I did raise the garage door several inches on cold and rainy nights, so that they could all seek shelter insde. One perched on the top shelf of a storage unit, another on the pile of fabric that for one week of the year made up the wall of the Sukkah, and the third curled up in an empty box. On occasion, another tabby from the street attempted to join the crew, and as long as he wasn’t a troublemaker, the others welcomed him. 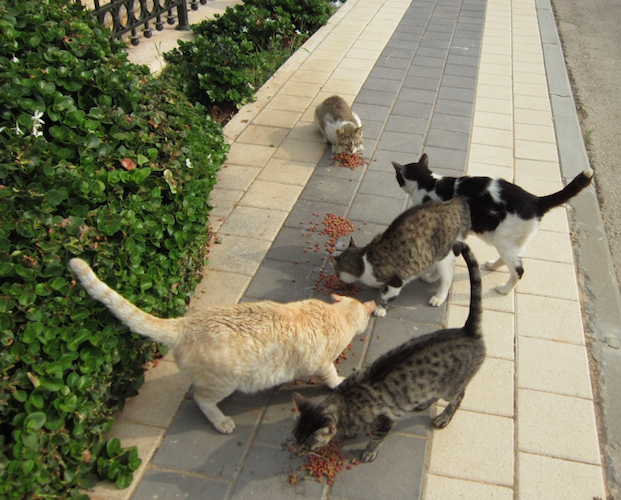 I started out by buying small bags of food, but pretty quickly I understood that I had a serious commitment on my hands and graduated to the twenty-kilo bags. The cat food, just like the dog food, became another household expense albeit one I couldn’t charge to the business.

Morris found his end the way many street cats do. He just disappeared one day and I never saw him again. I felt sad but got over it relatively quickly. Mitzi was another story. I noticed something weird happening around her mouth and her behavior changed. Turned out it was some sort of cancer or horrific disease and the vet told me there was nothing that could be done for her. I was beyond depressed to bid her farewell. Twelve years is a long time to have a street cat, especially one as regal as Mitzi.

Maxie was still with me. She kindly welcomed a new intruder into the clan and they became best friends. No matter how many piles of food I put down, they ate from the same pile, after first nuzzling each other. While the new cat was jumpy and nervous and always got in my way as I tried to feed it, Maxie stayed back and waited for me to finish.

That’s what struck me about Maxie – and it took me a while to realize what a special feline she was. When I started to think about her, I realized that her philosophy of life was one we should all follow – and it was probably what enabled her to reach the age of 13.

Here’s what I learned. Don’t rush to get your food. It will be there waiting for you even if you’re not the first at the table. Don’t eat it fast – that won’t help your digestion and certainly won’t help you enjoy it. Avoid confrontation – if you see a threatening cat approach, pull back. Don’t start up with strangers, don’t antagonize and don’t engage when you sniff danger. Maxie was always the first to run away when she sensed a hooligan in the neighborhood. Whenever I heard a cat fight taking place outside and ran out to break it up, Maxie was always hiding. She never got into trouble and kept as far away as possible. She was friendly but careful. She followed President Reagan’s philosophy – trust but verify. If you made an effort to pet her, she’d approach with caution, and only when she was sure you weren’t going to hurt her, would she come close, purr and let you caress her.

I wish I knew who needs to be trusted and who to be verified. I wish I could walk away from food when I’m not hungry or know when I don’t really need to eat. And I certainly wish I could learn to shut my mouth instead of reacting when I sense danger or hostility in the air. I suspect if we all acted a bit more like Maxie, we’d all live longer, happier lives.

Wouldn’t you know it, just as I ordered a new bag of food recently (I finally got smart and had I it delivered instead of schlepping it home myself), all the cats disappeared. Maxie is gone. Just like that, no signs of illness or discomfort. She just stopped showing up one day. I don’t know if she was hit by a car, or went off to find a quiet place to die, or perhaps was adopted by someone? I guess I’ll never know.

I’m feeling sad, like I’ve lost a very old, loving friend. Maxie asked nothing of me, other than to be fed and occasionally petted. She seemed grateful for whatever I gave her and her kindness to other cats touched me. She was a lovely soul and I hope wherever she is now, she is content and at peace.

Farewell Maxie, my noble cat, I shall remember you always.